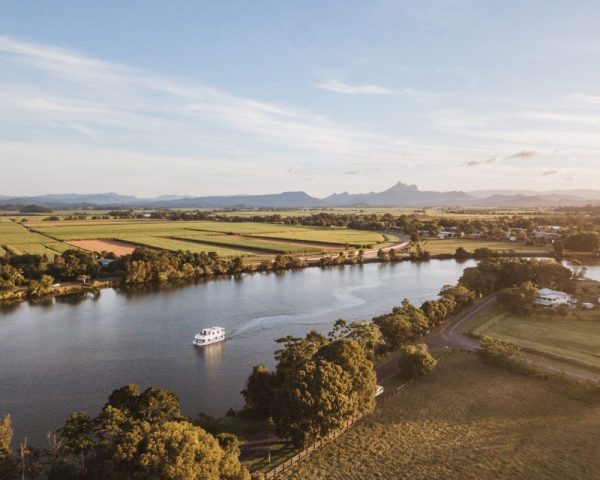 Dubbed the Green Cauldron, this verdant volcanic expanse stretches from the sunny vineyards of the Scenic Rim to the fertile farmlands of the Byron Shire. A smorgasbord of farm-to-table restaurants has sprouted up everywhere in-between, plonking freshly plucked produce into their refined gourmet fare.

Keen to hear what the hype is about? Today we’re covering the east coast’s most enchanting foodie haunt.

What is the Green Cauldron?

The Green Cauldron encircles a slice of South East Queensland and Northern NSW, roughly from Tamborine Mountain down to Byron Bay. Its average annual rainfall is much higher than most other Australian regions, resulting in a lush, rainforest-strewn landscape indispersed with fertile agricultural land. It’s not hard to see why they call it “green.”

As for “cauldron,” the area is a mysterious melting pot of mineral-rich volcanic earth, prehistoric Gondwanan wildlife, verdant farming valleys, and crystalline coastal waves. But more importantly, much of the majestic landscape has been shaped by Mount Warning (Wollumbin), an ancient volcanic caldera. Meaning “cloud catcher” to the Bundjalong Nation, this towering volcano is the first place in Australia to see the sun’s rays.

And it’s not just your stock-standard fruit and veg grown here. Innovative Green Cauldron farmers are trying their hand at a slew of more exotic crops. From feijoas to ginger and macadamia nuts, you’ll be amazed at what you stumble upon during a Saturday morning market run.

Then you’ve got the Sunshine Coast Hinterlands dairy industry, which is among the most well-regarded in Australia. A temperate year-round climate allows esteemed dairy farmers to concoct delicious yoghurts and cheese, at times made from exotic milk like buffalo or camel. Kenilworth Dairies and Maleny Dairy are the creams of the crop.

Over on the coast, local fishers pluck the fruits of the sea fresh from the waves each day. Tin Can Bay prawns, Noosa spanner crabs, and wood-smoked salmon are just some of the ocean-dwelling delicacies on offer.

Although large-scale agricultural corporations comprise the lion’s share of production, a growing number of boutique farmers have taken to ploughing the land. Sustainability-focused, small-scale producers are sowing environmentally friendly crops; most get slapped straight into a dish at a trendy, farm-to-table restaurant.

Looking to savour the best Green Cauldron gastronomic experiences in one action-packed excursion?

5 Hen’s Party Ideas For Your Most Luxurious Bestie

Are you on the hunt for some different hen’s party ideas? Is the usual nightclub hen’s night out not the bride’s cup of tea? If

Dreaming of living the holiday highlife in one of those luxe Byron Bay Airbnbs? Then check out (and check in to) these eight amazing digs.

5 Most Indulgent Spa Retreats of the Tweed

Is it time to put yourself first and indulge in a whole lot of pampering and relaxation? If so, check out these amazing spa retreats

Stay up to date with our latest offers, receive exclusive deals and so much more